Keep a green bough in your heart,

And a singing bird will come.

The spring opening of the Echo Pond Centre is just around the corner, so I haven’t been there in person recently. In the meantime, here’s a short blog post about some reflections on environmental education that came from a chance encounter with a ‘neighbour’ in my current habitat 🙂

Recently, I was walking up a steep hill in Norman’s Cove, and a tiny bird landed on the very tip of a spruce tree a few meters away from me and began to sing. The bird sang for about 5 minutes, repeating the same song. In the pauses between the song, I could hear another bird in the distance echoing the same tune.

As much as I love songbirds, I’m very much a beginner birder, so I used the Cornell University bird identification app, Merlin, to record and identify the bird. I was delighted to find out the bird’s name: Song Sparrow (Melospiza melodia).

Upon further looking into the Song Sparrow to see if the app had identified the bird correctly (There can sometimes be errors: one time I was laughing while recording a variety of birds and was identified as a Common Eider, but generally, it seems to be impressively accurate). I looked up the Song Sparrow in the Birds of Newfoundland Field Guide and it sounded about right:

“They are named for their habit of beginning to sing early in the year and broadcasting melodious songs well into the fall”. Their calls often started with a “… repeated series—sweeet–sweeet–sweeet–followed by buzzes, trills, or twittering, and ending with a descending trill.” 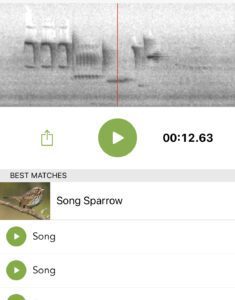 How words can help you notice

My delight at finding the name of the bird reminded me of words by the local environmental artist, Marlene Creates, in a recent CBC Morning show interview. When she first started to get to know Newfoundland’s Boreal forest, she described it as being a ‘blur’ to her. So she started getting to know the forest, one tree at a time.

In one of her projects, this one focused on winter, she learned words for ice and snow from the Dictionary of Newfoundland English, observed and photographed those features throughout the winter, and from that, created the book Brickle, Nish and Knobbly: A Newfoundland Treasury of Terms for Ice and Snow

Pages 18 and 19 from Brickle, Nish and Knobbly

Clinkerbells hang from the spruce branches

within reach of the splash

Pulsing from the waterfall,

and the boulder at the bottom

is ballicattered with glassy pearls

This project made her see winter differently, noticing the richness that was already there but not immediately visible to her.

She described the place she lives, her ‘property’ as not so much being her property, but the habitat in which she lives and is a part. A habitat that it takes time to get to know.

Back to spring and the Song Sparrow

After identifying the name of the bird and listening to their songs, I did a little more research. I found out that some people described their song as sounding like Beethoven’s 5th Symphony.

They are also described as adaptable, variable and live in both forest and semi-urban areas and so are present through a large swath of North America.

Perhaps most intriguing, is how Song Sparrows that live in different places sing different songs. It’s a reminder that the sound of each habitat is always unique, even when the same species of bird is present.

There is an abundance of things we can learn from our habitats if we start to really notice, and often children are the most observant. When we give opportunities for children to nurture that quality, the whole world can become more alive to them.

Going back to the quote at the beginning, to hold a green bough in your heart is to be open to the richness that is already there, right in your very own habitat.

Are you a teacher hoping to nurture curiosity about the natural world in your students?

Book a spring or fall session at the Echo Pond Centre by emailing schoolprogram@echopond.ca

Looking to get started in your own classroom? The book, Natural Curiosity, 2nd edition, and associated resources, which bring together Indigenous wisdom and environmental inquiry, are a great place to start.